Understand better the Future of Energy and CO2 Paradigm 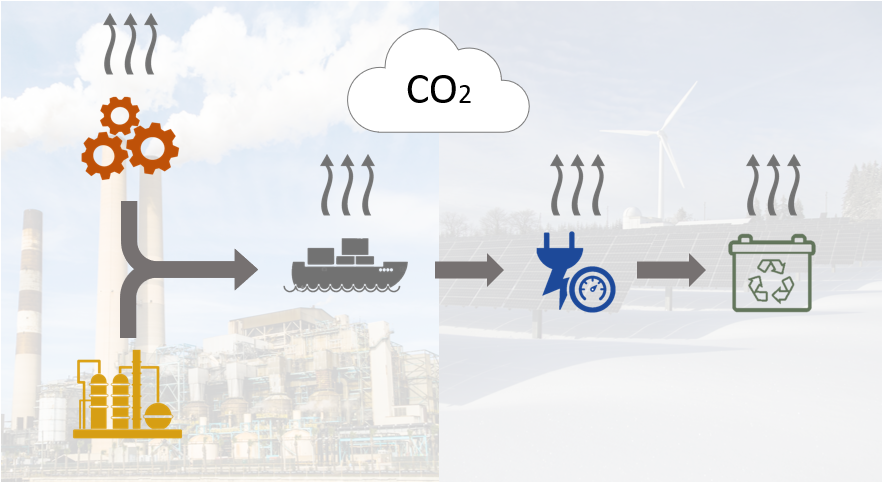 We often tend to take for granted that diesel cars pollute and electrical vehicle are clean. Is it true though? Or is it a bit more complex?

This article presents in a straightforward way the Global Warming Potential (GWP) of different energy sources and power generators. It simplifies things to make the content accessible and is therefore not a scientific review. Nevertheless, we have used real and factual data with sources clearly mentioned in the annexes. At Inergio, we develop fuel cell systems and we take our environmental impact very seriously. It’s a 5 min read without the annexes.

How do we measure and compare greenhouse gas impact?

We only tend to consider the emission of greenhouse gas during consumption. For example, a car motor is on, fuel is consumed, some CO₂ and other emissions are generated. Nevertheless, the production, maintenance and disposal for the different type of generators need to be considered altogether.

Global Warming Potential (GWP) is measured in grams or kg of CO₂ equivalent (abbreviated by CO₂-eq). Emissions which aren’t CO₂ are converted to CO₂ equivalent depending on their environmental impact. For example, methane’s effect on the climate is 28 times more severe than CO₂. Similarly, nitrous oxide is considered more impactful than CO₂ almost 300-fold.

CO₂-eq grams of emission per kWh of energy produced is the standardized way of comparing the global warming potential (GWP) of various energy sources. Units used in this article are explained in detail in annexes.

We will focus especially in this article on production and operation impact. Maintenance and end-of-life will be mainly mentioned in a qualitative way. We can consider more parameters in a full life cycle assessment (LCA) but we will mainly focus on the Global Warming Impact (GWP).

Summing up (starting from the conclusion)

Unlike many articles, we’ll start with the final results per energy source. If you’re seeking more detailed information, everything is available in the annexes.

Total greenhouse gas impact per couple of generator-fuel are presented in the two following graphs:

If you were seeking for a 5 min read, you reached your goal here. The annexes explain how we reached these numbers in a more detailed way.

If you’re interested by what we do and how can our solutions reduce off-grid CO2 impact, just visit our website:

Annex A: units used and description

The units used in this analysis are:

Several aspects are usually considered to define the impact of power generator manufacturing and installation:

The CO₂-eq impact associated with the manufacturing and transport of a generator is then usually divided by the total energy expected to be produced during its lifetime. It allows the definition of the overall impact in CO₂-eq per kWh produced by the generator, associated with its production.

Note that Proton Exchange Membrane Fuel Cell (PEMFC) is most used in the automotive industry but can only use ultra-pure hydrogen. Solid Oxide Fuel Cell (SOFC), like the one we develop at Inergio, has high operating temperature and can use several fuels not just hydrogen.

An important point here is that if a solar panel for example is under used, its impact per kWh will grow, e.g. a solar panel used only at 20% of standard conditions will have an impact of ~235g CO₂-eq per kWh of energy produced.

We used a reverse calculation. From the average impact found and the energy produced over lifetime, we deducted the final impact of the production:

In general, micro-tubular SOFC manufacturing is more complex, which would explain why the value is so high. In the case of the large SOFC system (100kW), the value in the reverse seems rather low but might be due to the large size of the installation that push down overall impact. The SOFC combine with a gas turbine is likely quite closed to what we estimate for our InoPower 1.0 fuel cell. For SOFC systems, we will consider 25 g CO₂-eq per kWh for large systems and 35 g CO₂-eq per kWh for small systems in terms of emission linked to production and installation of the generator.

Example of 1kW system seems rather low as it’s lower power compared to the 80kW and lower impact so we won’t really consider it. In general, for PEMFC systems, we will consider 13 g CO₂-eq per kWh produced of emission linked to production and installation of the generator.

Fuel production and transport, called “well-to-tank impact”, is an important aspect to be considered. For fossil fuels, it’s linked to extraction impact and transport. For green hydrogen for example, it is mainly linked to the electrolysis process energy needed, i.e. to convert water into hydrogen.

*Emissions linked with the production and combustion of the fuel

*In off-grid setup, solar panels are often oversized for the worst period of the year resulting in low energy usage.

End-of-life and disposal of generators are not a strong focus in this article. The main reasons are that often, it isn’t a very impactful step in terms of Global Warming Potential (GWP) and therefore in CO₂-equivalent..

To come back the conclusions on the top: Summing up